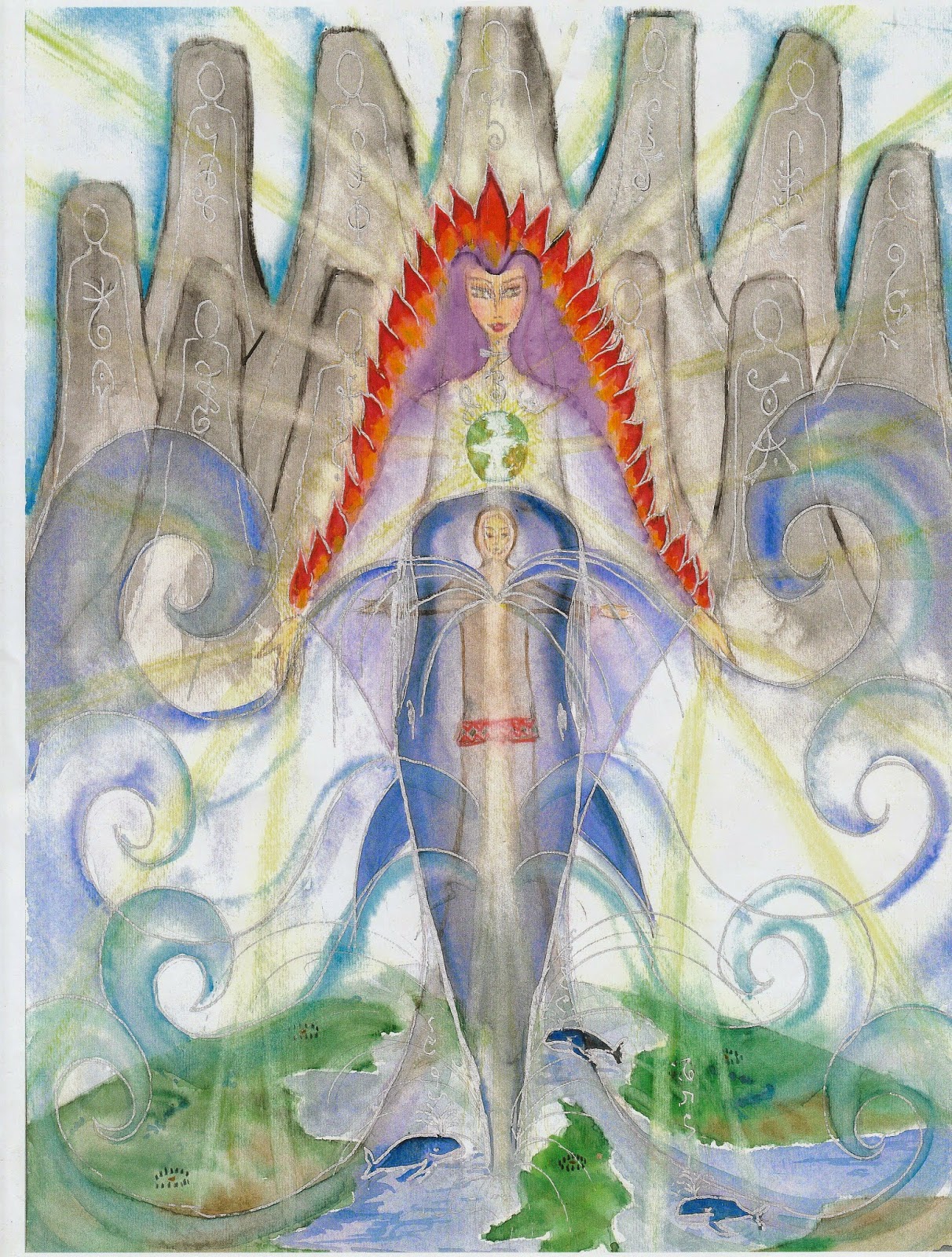 I painted this in 2007 and as with my all paintings I recognized my Self in it. Yet it was not till today, 1/24/2015, a "6" Day of Family, Home, Service, Healing, Relationships and Love that the memory of this story told within its lines and colors was given back to me.

Over the years, it has come to my attention that I am a Storyteller, it is in my DNA's ancestral lineage, but more importantly it is intrinsic to who I Am and, like those who passed on ancient knowledge hidden among time honored traditions and wisdom disguised as symbolic stories of heroic deeds and tales of broken hearts and sat around fires of homes, castles, sharing stories of other times in mythical places through songs, I have held an energy that was only allowed to be a flicker till now, and so, the story I am about to tell is not only mine but yours as well, with other circumstance, different actors and words, however yours!

Please take note that the pronoun "He" is not meant as a referral to the sex but rather as the Form, the masculine aspect, the physical, versus the Unformed, the feminine aspect, or consciousness.

And so it begins " Once upon a Time, a long, long time ago, when Mankind and the Land and all creatures upon it were One still, there was a Child from the Tribes of the North who had the ability to talk to the Animals, but He had an even more profound affinity with Whales, those great, magnificent Beings of the Deep who came from the Stars. Indeed, He knew and understood their melodic Whistlings and responded in kind and their joyfilled interactions and communications resonated in All the Land and All the Heavens.

Till one Day, He was told of big Changes to come for his Tribe, and how they would affect all that had sustained him and others, and for the first time in his Life, He felt an unknown, his Heart began aching and pounding in his chest and water fell from his eyes as he began experiencing the first stirrings of Pain and an emotion called Fear. For many Days and Nights, and Nights and Days, the Decision taken burned in him as He explored this other unknown, Anger. He wrestled with it, not understanding, crying out loud at his pain and new Sounds came forth. His Friends, indeed, his Family stayed by his side, a quietly comforting presence, watching silently, honoring and respecting the new places He was discovering within his self.

He had not a single Tear left to cry when He finally quieted and was ready to listen. He asked to be shown and understand the Wisdom and Love behind those Changes. As He asked to Know, so He was given a Gift, He was told that He and others, who like him had also asked to understand, would become the Keepers of the Memories of the Original Language for All mankind, the Language of Home, of the Hearth of Home, LOVE, and so they would be Known as the Keepers of the Flame, till such a Day would come, and it was a Promise, when Mankind was ready to RE-MEMBER.

And so the Whales formed a circle around him, and in unison, they sang their ultimate Song and He was filled with it, as Knowledge poured from their Hearts into his in great golden Fountains of Joy.
When it was done, they went back to the Stars whence they had come and He was left alone. And soon, from the Four Directions, they came, other Children of Hearts as Pure as his, who had also asked to understand and had received the same Gift.

From this, many wished to honor them, creating circles, keeping the Flame alive in Memory and Honor of the Original Ones, and as they emulated so they became One with the Original Memory Keepers, and the Power grew and grew till it no longer could be contained as a mere flicker but became a raging Fire burning more brightly and hotter than any other, and it was decreed by All, in the Land and the Heavens, that it never would be allowed to be put out again.

And so, this is how, a young Child of the North came to be Keeper of the Memories and the Original Language for Mankind.

Posted by Marie-Cecile at 8:24 AM No comments: